At the end of 2019 there were 63,908 resident (not tourists or visitors) adults and children, mostly Bermudian, in Bermuda's 20.75 square miles or 56 square kilometers.  Women outnumbered men by 2,398. For more information go to the Bermuda Government's Department of Statistics at gov.bm/bermuda-census.

Bermuda today is the third most densely populated place on earth. In terms of population per square miles, this is only exceeded by Monaco with 15,921 and Singapore with 6,891 persons. After Bermuda comes Vatican City with 2,200 per square mile; Malta, with 1,229; Puerto Rico, with 1112 (yet often written about in USA, including by the National Geographic, as one of the most densely populated places in the world); Bahrain, with 1,042; Maldives, with 1,036;  Bangladesh, 962; Taiwan, with 699; Mauritius, with 647; and Barbados, with 642. In contrast, note the very low populations per square mile of the United States of America - from where over 85% of its visitors come; then Canada; United Kingdom (632); Japan (870); Netherlands (1002).

Bermuda is the fifth smallest country in the world at only 21 square miles in total, after Vatican City, Monaco, Nauru and Tuvalu; and is one of the most isolated. 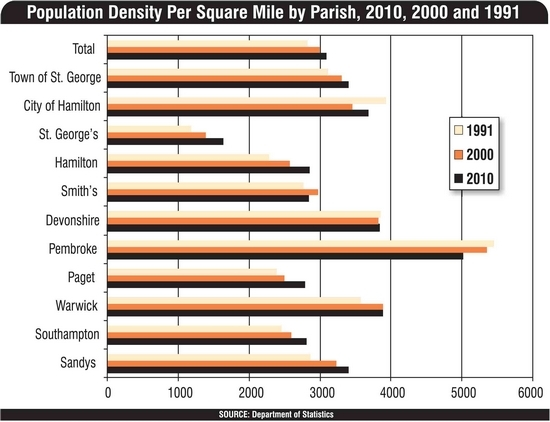 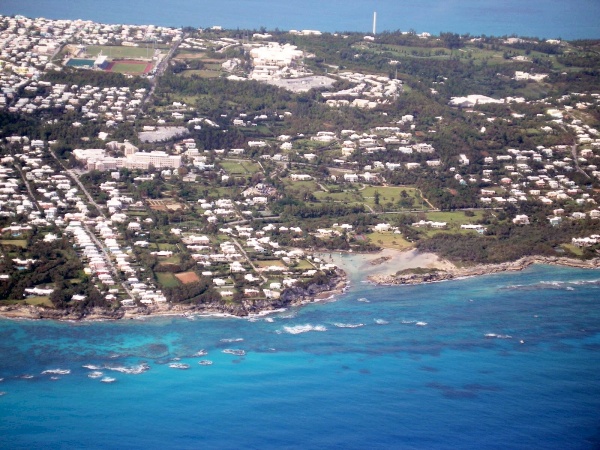 The least densely populated area of  mainland Bermuda is Tucker's Town in St. George's Parish, an exclusive area for the very wealthy that denies access to all locals and visitors who are not members of the Mid Ocean Club.

Unlike most other places with a native population dating back to the mists of time, Bermuda had no resident permanent population at all until 1609 when English settlers came by accident, then came deliberately from 1612. Only a few stranded mariners were here earlier, involuntarily and briefly. Bermuda was too tiny (only 21 square miles in total area), had no natural resources, no gold or silver or anything else that could be mined or refined. It remained without a permanent population long after the Spanish, Portuguese and Dutch East Indies empires were established, the French founded French Canada and the British founded Jamestown. See History. Nowadays, Bermuda is both a tourism resort and offshore business center.

Other population statistics, Bermuda has

The majority of the permanent residents are described first, followed by the minorities. More than 68 percent of Bermudians are black, of African heritage, Afro-Bermudians. The first came here in about 1616, appreciably after the first white colonists. Some descend from slaves imported by British settlers, not directly from Africa but from Africa via the Caribbean more than 900 miles to the south. Some American Indians were also brought to Bermuda in the 17th and 18th centuries, as slaves or prisoners-of-war. Black slavery (like white slavery or serfdom much earlier) was effectively abolished in Britain since the early 1800s. Slavers and slave ships were relentlessly hunted down in the Atlantic and Caribbean by Royal Navy warships. Slavery was formally abolished in Britain much earlier and in Bermuda in 1834.

From the 1880s to the early 1900s, many Afro-West Indians arrived voluntarily from many islands of the Caribbean 900 or more miles to the south and settled. Many Bermudians have forebears who came originally from them. There are also Bermudians and non-Bermudians here, originally or currently from the following islands.

In July 2003, Bermuda formally joined the Caribbean Community, as an Associate Member (non-voting member), in certain areas but not in others. This specifically excludes the free movement of Caribbean nationals to Bermuda and any prospect of Bermuda joining CARIFTA or its newest free trade organization - the Free Trade Area of the Americas (FTAA) - and its hopes. Membership of the Caribbean Community will cost Bermuda about US$90,000 a year. Direct trade between Bermuda and Caribbean countries is also welcomed and encouraged, especially given the close or extended family links many Bermudians have with Caribbean islands or territories. Because of this, there is a Monday-Friday 10 am and 5:45 pm 5-minute Caribbean news feature on local radio (VSB) produced by the BBC of England and a lively Caribbean-produced feature on certain evenings. But the irony is that there are no scheduled air or sea services at all between Bermuda and the Caribbean, as there were in the 1930s, 1940s, 1950s and 1960s. Only Japanese car carriers - no regular freighters - call at both Bermuda's City of Hamilton and some Caribbean ports. It is hoped they will resume. Many visitors to Bermuda from the USA and Canada assume - wrongly - that there are air services connecting Bermuda with the Caribbean nearly 1,000 miles to the south. Presently, virtually all imports to Bermuda made in the Caribbean come via the USA or Canada. All visitors to Bermuda who are nationals of and resident in Caribbean islands must come via the USA or Canada or United Kingdom and must have appropriate visas to come via those countries. Effective January 2003, all Jamaican nationals who are not Bermudian must also have a visa to enter Bermuda on business or vacation.

The second-largest (about 33 percent) ethnic group of Bermudians are Caucasians - white. They were the first to arrive as colonists by an appreciable time and for years outnumbered Afro-Bermudians.  Many are of European extraction, descend from original British colonists who emigrated here voluntarily and can often trace their roots back to England, Scotland, Wales and Northern Ireland. More were imported, either as free people or as indentured laborers for a period until they earned their freedom. Relatively few came in one of these two ways originally from Ireland, France or other European countries.  They were joined by one-time Portuguese laborers brought in initially from the Madeira Islands as agricultural labor when slavery was abolished in the 1830's, then from the Azores. More recent arrivals have come, in order of numbers, from Canada, the United Kingdom (Scotland, Wales, Northern Ireland again and Channel Islands as they too use British passports) and the United States of America. But as Bermuda is an international business center, many collectively have also come from Europe, Asia, Russia, Turkey and more.

In those who are not Bermudian - not by preference but by law, despite having been here for many years and would easily qualify by residence as citizens in all other Western Hemisphere countries - Canadians are the most prevalent in the international industry of accounting and auditing, banking, Bermuda Government, commerce and education, the largest single group of guest workers. Britons are next. Many Americans are here, some as spouses of Bermudians. A number of Asians work in the hotels and restaurants. Some from the Philippines are in domestic service or the restaurant industry or are registered nurses.

Those born in other countries, or in Bermuda but without a Bermudian parent and are also not Bermudian, may have access to a Bermuda-based Consulate from or representing their country. A number of these are in Bermuda, serving both their incoming or resident nationals and visitors going to such countries from Bermuda.

Quite a few, including:

There are currently about 43,200 registered voters, about 60 percent of Bermuda's total current population. As soon as local citizens become at least 18 years old they can register to vote.